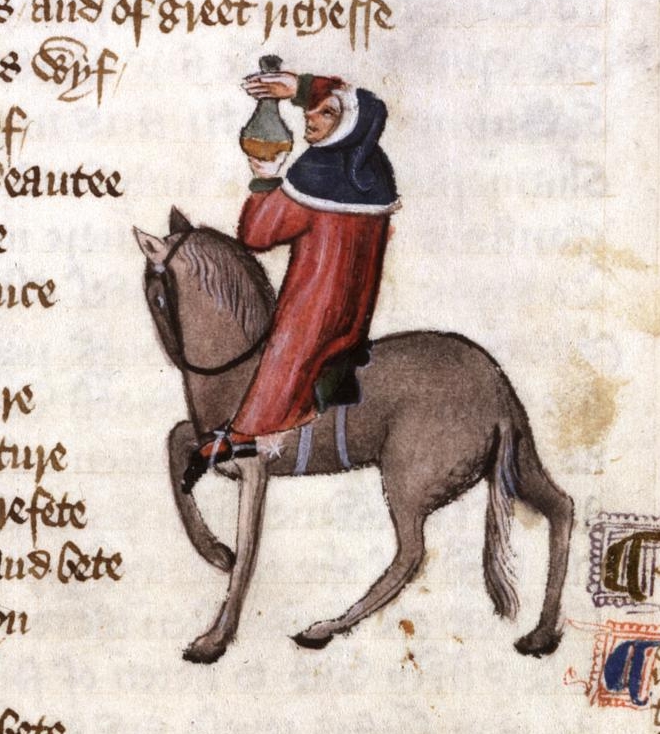 I have recently come across two amazing examples of digital humanities in which traditional content of Hamlet and the Canterbury Tales is presented via fundamentally new interfaces. The way this content is styled allows for the viewer and reader to interact with these classics in startling new ways.

The Canterbury Tales and edtech? Chaucer’s 14th Century classic ? Yep, you guessed it, there’s now an app for that. And it’s amazing; and it is a great example of embedding print within multimedia to enhance understanding.

VR is another medium that shows great promise. Thus far, it seems that the military and gaming industry is using it more than anyone. Artists, scholars and writers really haven’t figured out what to do with it yet. I look at a lot of VR so I can filter the junk and share the best with all of you. And much of it isn’t very good. So, I was thrilled to discover this 360 performance of Hamlet. Go grab a Google Cardboard headset or get a better one from the tech suites to watch it. You haven’t really seen anything like this before. Here’s what the Grey Lady had to say about it.

Both of these are stunning. Check them out! I encourage us to think more about teaching kids how to begin to do this. It will be sloppy and messy. For instance, we have no clear understanding of how to grade such work. It takes us far out of our comfort level and area of expertise.

But wouldn’t it be fun? VR allows for an experience of immersive environments similar to or completely different from the real world. FCIT boasts a cart that provides 12 Lenovo Daydream VR headsets. Take you class to the cart or the cart to your class! Each headset has a different number from A-1 to A-12. Each pairs with a unique control pad. It’s easy to get your hands on these VR headset.

Still wondering what to do? Here are 3 recommendations:

Here is a link to the Flipgrid page and attached resources it included on VR/AR and Flipgrid for further viewing.

This article and video were produced by the FCIT tech interns. We have edited the article for clarity and brevity.

FCIT offers for classroom using three different VR systems. Listed in order of complexity, we have 22 Google Cardboard headsets that can be used with any smart phone for an easily accessible classroom 3d experiences. We also offer 12 Lenovo Dream Headsets in a cart. Finally, we now have two highly sophisticated HTC Vive VR systems in the tech suites.

These portable, easy to use devices work with any smartphone. Apps we like include Google Expeditions, YouTube360, Google Arts and Culture, and Titans of Space

FCIT proudly hosts a managed set of 12 of these. Offering the above options and many more, Daydream offers impressive visuals. Our favorite feature is that teachers can lead “tours” on Google Expeditions through the Daydreams.

For the most immersive and interactive experience, with the most possibilities we offer  the HTC Vive. While the HTC Vive is more complex than the alternative VR Headsets it is vastly superior in its ability to interact with the virtual environment, and is less complicated than it appears.

These HTC Vive offerings give a sense of the variety and depth of the offerings. We can get hundreds of programs. These include programs such as:

Nanome – Science – This app allows students to collaborate in a virtual environment, the students can interact with proteins, molecules, and atoms up close in a way that is impossible in real life.

Becoming Homeless VR – Social Studies / Psychology This story / interactive experience puts students in the life of someone that has been evicted and can no longer afford a house. Students can fully understand and feel what it is like to be homeless, allowing them to empathize with the large amount of people in that situation.

Anne Frank House VR – History- Follows Anne Frank during WWII, allows the students to see what historians believe happened rather than the stories. Includes excerpts from her diary.

Kremer Collection VR – Art- This VR experience allows you to explore a large collection of classic artworks in incredible detail, getting closer than you possibly could in real life.

Hololab Champions – Science- This VR app allows the player to experiment and do challenges involving safely creating chemical reactions, this turns chemistry into a game so that the student can actually enjoy and will want to play this educational game.

Mel Chemistry VR – Science- Mel Chemistry VR has a large variety of lessons from atoms to molecules and everything in between, designed to hold a young student’s attention and help them optimally absorb the information.

1943 Berlin Blitz – History-Helps the student get a more immersive view and helps them fully understand WWII from another perspective.

The Body VR – Science (Already Included)- Enter one of the billions of living cells inside our body and learn how the organelles work together to fight deadly viruses.

Here’s a mashup video made by the tech interns show some of the amazing things the Vive can do.